My first book, Inventing George Whitefield: Race, Religion, and the Making of a Religious Icon, was published by the University Press of Mississippi in March 2015. The paperback was released in 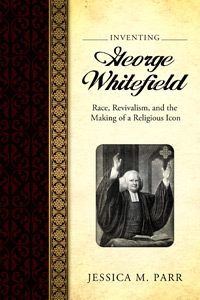 the fall of 2016. The book began as an exploration into the controversy over catechizing African slaves in the British American colonies, and Whitefield’s role in the conversion of enslaved Africans. (Many clergy believed that Africans did not possess human souls, and some believed conversion of slaves would make them defiant.) As research expanded, the project grew into studying larger questions about Whitefield’s significance in the British and Black Atlantic Worlds, and the persistence of his image. I argue that Whitefield was a trans-Atlantic icon shaped in the complexities of revivalism, the contest over religious toleration, and the conflicting roles of Christianity for enslaved people. Evangelical Christianity’s emphasis on “freedom in the eyes of God,” combined with the problems that the rhetoric of the Revolution posed for slavery, also suggested a path to political freedom.  My exploration of the evolution of Whitefield’s pro-slavery thought and its reconciliation with his religious influence on anti-slavery figures like Olaudah Equiano, along with my application of memory studies to understanding how Whitefield evolved as an icon, are among the book’s central contributions. The book uses a lens of memory to assess (and reject) the frequently nationalist, hagiographical treatments of Whitefield. The paperback will be released in November 2016.

My current manuscript project explores the ways in which African American anti-slavery activists navigated the political and social structures that codified and perpetuated slavery between 1760 and 1860. One of the questions this book will explore was how African American activists’ responses to the diasporan entanglements with slavery changed from the eighteenth-century, with writers like Phillis Wheatley, Prince Hall, and Lemuel Hayes, to nineteenth-century writers like David Walker, Alexander Crummell, and Maria Stewart. The book then uses critical race theory and digital humanities methodology to argue that these activists created geographies of resistance that were shaped around the structures of slavery and white supremacy. I have collected data on over 500 Black intellectuals and activists who appear in slave narratives, court records, tracts, sermons, and other sources from British North America/the United States, the Caribbean, and the United Kingdom and use the data visualization and geospatial analysis address the fragmentation of the Black archives (as described by Marisa Fuentes). My descriptions of the development of an African American intellectual geography draws from radical geography, deep mapping, and countermapping techniques within Black DH.  The research for this monograph has received funding from the John Hope Franklin Research Center at Duke, the Schomberg Center, and Boston Athenaeum among other places. I have also been invited to present work-in-progress at Yale, Oxford’s Rothermere Institute, and the University of Edinburgh. I have enclosed the draft of an essay discussing my use of African American spatialities that will eventually be published in “The Age of Revolutions in the Digital Age,” by Cornell University Press. You can find samples of my geospatial work for this book project here. Some samples of the (preliminary) textual analysis work I’ve done for this book project can be found here.

I have an edited collection of the selected papers of eighteenth-century British physician/clergyman/abolitionist James Ramsay under contract with the University of Georgia Press. These papers draw on collections from the Bodleian Library and New York Historical Society, and are comprised of research notes, drafts, and correspondence complied by Ramsay in the course of writing his two abolitionist pamphlets published in 1784. The first was An Essay on the Treatment and Conversion of African Slaves in the British Sugar Colonies, and the second was An Inquiry into the Effects of Putting a Stop to the African Slave Trade: And of Granting Liberty to the Slaves in the British Sugar Colonies. Ramsay’s pamphlets helped to draw attention to the (white) British public debate over slavery in Great Britian, as well as capturing the eye of the Bishop of London, who oversaw the Society for the Propagation of the Gospel’s plantations in the West Indies. The collection offers insights into political debates about slavery leading up to the Slave Trade Act of 1807, late eighteenth century attitudes about race, the economics of slavery, and the limitations of white abolitionism.